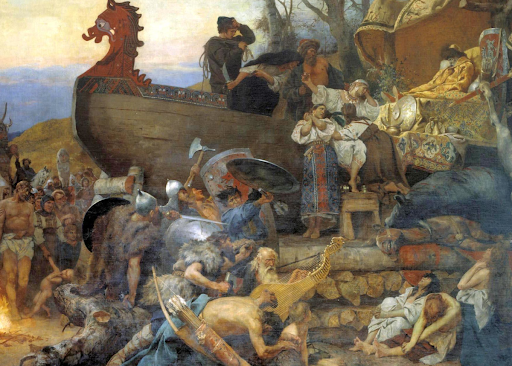 The Norse area of influence extended from Scandinavia to Kiev and Novgrod in the east, to Constantinople and Baghdad in the south via river links.

Among the oldest known accounts of pagan Scandinavian rituals in Slavic territories, the one by Ibn Fadlan, a delegate from Baghdad who witnessed and reported on the funeral and cremation that took place on a Rūs ship around 922 AD, is of great importance.

This rite, held on the occasion of the death of a noble, was presided over by a figure Fadlan describes as the ‘Angel of Death’, accompanied by two ‘daughters’.

The analysis of the sources of Noel Braucher, who traces an archetypal representation of the Norns in Fadlan’s description, will be reported.

Arabic sources are very valuable for understanding pre-Christian European spiritual traditions, as they used a rather rigorous scientific method between the 8th and 14th centuries.

Ibn Fadlan’s story proceeds according to a structure that presents many parallelisms with those used by modern anthropology, with a narrative of facts that appears rather objective.

Therefore, there’s no reason to doubt what has been reported, after analyzing the starting point of view.

First of all, the term ‘Angel’ is clearly the Arabic interpretation of a Norse entity that has no equivalent in the Abrahamic cosmology to which Fadlan refers.

A more appropriate translation might be “Valkyrie”, a widely attested figure in Norse tales.

Valkyries are entities that are often ambiguous with the Disir and Norns of Fate, especially in the late Norse cosmology referred to here.

In particular, Valkyries and Norns seem to merge in their role as weavers of the plots of fate, and are so described in Njal’s Saga and the Poetic Edda.

Plausibly, “of Death”  instead referred to the funerary context of the rite in question.

Therefore we can assume that from the Rūs perspective she was a “Valkyrie of Death”, a “Seer of Death” or a “Norn of Fate”.

To contribute to this theory, Fadlan also calls this woman a “Witch”.

Other elements supporting these alternative translations are found in ritual signs and symbols reported by Fadlan and commonly associated with the Norns of Fate.

Firstly, this woman is described as being responsible for sewing and arranging covers such as Byzantine silk pillows and other items on the bed of the deceased.

One can imagine that the sewing activity required for such a funeral would have included elements woven with symbols of the cycle of life, as is the case in contemporary Ukrainian traditions.

As the ritual proceeds, a slave girl is described who volunteers to be sacrificed and accompany the deceased.

The “Angel of Death”/Norn then removes her bracelets, while the two “daughters” remove her anklets.

It’s probably apprentices assisting her in the ritual, which would be consistent with the depiction of the Three Norns, a common Nordic description.

The possibility that bracelets and anklets also had a magical/ritual function should be considered.

Afterwards, the slave girl is offered two ritual cups to drink from, while she sings songs to friends and attendees in preparation for her demise.

Ritual drinking is a recurring theme in large areas of Indo-European mythology, and of particular relevance is the Germanic topos of the Maiden with Mead 8 , who conducts ritual initiations.

In these ritual drinks, a consecrated alcoholic is used to achieve a state of ecstatic intoxication.

Sometimes, in literature, the theme of the Maiden with Mead includes journeys through the realm of death to the afterlife in a ritual boat called a “Steed”.

According to the above sources, it is possible that ritual drinking was central to the entire procession, and that in this narrative the Norns in charge encouraged the slave girl to reach a state of ecstatic intoxication that would adequately prepare her for her journey to the underworld.

The slave girl is finally taken to the boat, where she is killed.

The boat and all its contents are then reduced to ashes.

On the basis of this examination of Ibn Fadlan’s account, there is evidence to suggest that the funeral of the famous chief Rūs in question was presided over by the representation of the Norns of Fate, as ritual leaders, weavers of the plots of destiny of all men and companions along the journey between life and death.

Noel Braucher “Norns as Fates among the Rus”, Ukrainian Myths, Rights, and Rituals

Lindberg, David C. “Islamic Science” in The Beginnings of Western Science – The European Scientific Tradition in Philosophical, Religious, and Institutional Context, Prehistory to A.D. 1450, The University of Chicago Press, 2007.

Kvilhaug, Maria. “The Maiden with the Mead – A Goddess of Initiation in Norse Mythology,” University of Oslo, Masters Thesis, 2004.