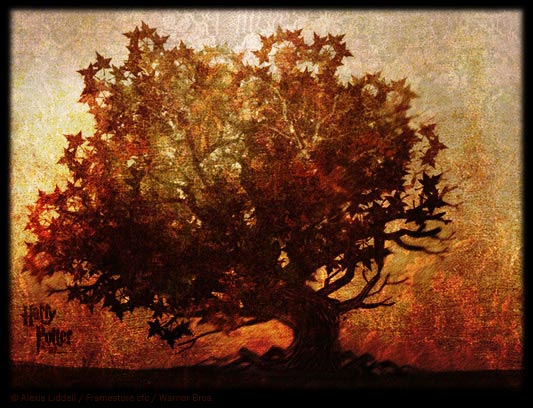 The tree in Norse mythology is intended as a support for the world. The three components of such tree (roots, trunk, branches) can be compared to the three layers of being, namely light, heat and drought in opposition and complementarity to darkness, cold and humidity.

The roots dig the subsoil, the trunk is linked to the live of the surface world, the branches rise toward the sky.

In the Nordic world, the cosmic tree is of tremendous importance. Studies have been carried out on the basis of archaeological finds, including rock carvings representing trees on ships thus reporting signs of its sacredness (for the Slavs and Lapps it represented the axis of the world).

We also have a strong connection between the tree and the sacrificial rites: a binder mentioned in some Scandinavian sagas in which it is also soaked in horse blood.

The symbolic importance of the tree means that every part of it is sacred, starting from the roots up to the branches in which the so called “Runes of the branches” were engraved.

The branch possesses grand life force: it can act as a magic wand, it is nourished by the sap rising from the root and it should also be remembered that some, such as the eldelberry, possess healing properties.

The elder name derives from the Greek “Sambyke” or “Sambukeo”; some studies associated the terms to the musical instrument made with the stems of the branches emptied of the medulla.

In the English etymology of the word we find elderberry written as “Elder” deriving from “Aeld”, also called “fire” since its stems were used to start fires.

In Latin we find it as “Sambucus Nigra”, cited by Pliny the Elder in his “Naturalis Historia”. Pliny wrote about the elderberry and its properties, delving into some methods of treatment to relax the lower abdomen or cure dogs bite.

In folklore we have evidence of the use of elder in Europe, examples are to be found in stories and legends related to divinities. In some cases it was considered a protector, in other an evil to be eradicated, in other (primarily by Slavs) a plant to be planted with apotropaic aims. A popular beliefs states that if we are under elder branches on the night between the 23 and the 24 of June we can meet the King of the Elves and his folk.

Its leaves were also rubbed on horseshoes to keep them from rusting.

In Germanic legends the elder is mentioned as a flute to be made with the branches of the plant, the procedure had to be carried out in a place where it was not possible to hear the crowing of a rooster.

In the Austrian area, in addition to being a protector, it also helped young girls to find a husband, through long practices and with particular associated seals.

Even some great authors wanted to talk about it, including William Sheakspeare who mentioned it in his work “The cimbelino”:

Stinking elder, melt the evil ones

Its roots from the flowering vine!”

Since the Stone Age the magnificence of the elder never ceased to be imbued with great qualities, medicine has made its honors but even more so has the folklore of the various tribes around the world who have honoured it since the earliest legends, it was “the tree of the Mother” which was not wise to offend.

Unfortunately, with the arrival of the patriarchate,  folklore took a different turn, many elements got hidden and the Goddess associated to the Mother was demonised, however, pagan traditions and mythology always preserved the elder figure and importance.

For example, the elders spoke of a sacred plant that housed Frau Holla “Winter Goddess”, inherent in her nature as a giver of life and death. This in one of the reasons for precautions to be taken with the elderberry plant. Cutting the branches or shrubs without due permission from the inhabitant that there resides leads to certain death.

One must never improvise as a witch or as a occult arts connoisseur, instead one must study deeply and practice in order not to encounter unpleasant situations, from which, sometimes, one cannot return.