Forms of lycanthropy in northern Europe 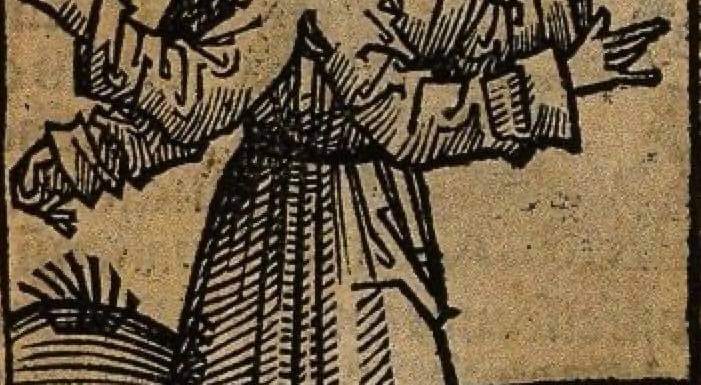 To fully understand this mythological passage of considerable importance for Scandinavian witchcraft, let’s start from the conception of the hamr as one of the parts that make up the soul (1).

Hamr is the astral body. It is the awareness and ability to learn through bodily mutation.

Boyer affirms that Hamr is “the internal form that intimately marries the body envelope […] this hollow form of which our appearances are the visible expression” (2).

For some witches, detaching oneself from one’s body represents a witchcraft act unique in Northern Europe, where the form of splitting as a shamanic act of absolute control, allows one to free oneself from space and time (3).

A constant relationship between the individual and the animal.

The northern witch is said to “travel in her form” of her, until she finds her ally, her own form of her, who “becomes the mightiest form” (hamrammr), whose power is constantl increasing.

The hamr is what allows you to perform ecstatic trances connected to berserkers and ulfheðnar.

Also in this case the idea becomes a symbol that wraps itself in the structure of popular traditions. The mythological rune of the wolf is investigated through the evolutionary history of an ancient object in use in central Europe. It is inspired by the historic wolf traps, consisting of two metal parts and a connecting chain.

The upper part of the trap resembled a scythe, with a ring inside, which was fixed between the branches of a tree in the forest, while the lower part, on which the scraps of meat were hung, was a hook intended to be swallowed by a wolf (known as Wolfsanker “wolf-anchor” or Wolfsjagd, Doppelhaken “double hook”).

This ancient symbol of sacrificial exchange, gift and reception of the element linked to the double of the Germanic and Scandinavian esoteric tradition, was composed of several runic elements indicators of communication, capture and descent between worlds to free the hamr. In ancient times, the wolf hook was a symbol of freedom, (esoteric) protection and independence: in the fifteenth century it was the emblem of popular uprisings against German princes.

Witches in the act of lycanthropy were also called ulfheðnarf, “wolf cloaks”. A term that appears in the Eddic poem Hárbarðsljoð which has a female counterpart (vargynjur) (5).

Vargúlfr was associated with Western traditions concerning the werewolf from which various sources derive with the help of Professor Lecouteux, in “Elle courait le garou: Lycanthropes, hommes-ours, hommes-tigres, une anthologie”: the first source it is classical antiquity; the second source is Germanic and refers to a particular belief about the soul, which can leave the body and take the form of any animal; the third is folkloric and is found in countless tales and legends: to strip oneself of one’s self so that the transformation takes place.

Between 1160 and 1170, Marie de France echoed this third tradition in Le Bisclavret, where we have a werewolf, who if he hadn’t recovered his human clothes, he could not have turned back into a man.

According to folk, the transformation is triggered by various elements: an ointment, a branch, a wolf skin, a spell, a curse and an evil.
In northern Germany, transformation was often associated with possession of wolf skin.

Among medieval Slavs and Germans, the child born with a piece of the amniotic membrana on his head was predestined to be a werewolf.
There are several ways a werewolf can return to human form: by recovering his clothes, being called a werewolf by someone who meets him, or by being injured.

If the transformation was caused by a spell or curse, you can also force the witch to utter the counter spell.
It was once believed that humans have several Double animals and that these could be released during sleep, coma or trance. This ability is a gift, often inherited from one’s ancestors.
The wolf is therefore only one of the possible animal forms; there are other types of were-creatures, as confirmed by the ancient Scandinavian texts.
In an Icelandic source, for example, we find a man who adopts the form of a bull to fight one of his enemies who has taken the form of a bear (Landnámabók, ch. 350).

There is also the story of the warrior Bödvar Bjarki, whose Double, in the form of a bear, lends assistance to his men while they are fighting a battle.
Behind all these transformations and all these shape-shifting acts, the shamanic act is always redundant: when the shaman is in a trance his spirit leaves his body and, in human or animal form, goes to the afterlife for a purpose. precise (6).