The symbol in the cuneiform 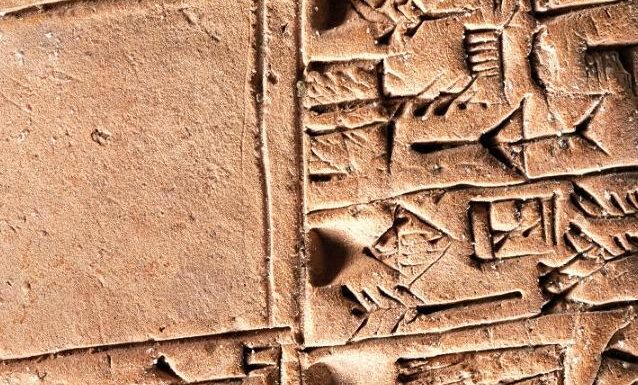 The origins of the cuneiform can be traced back approximately to the end of the 4th millennium BC. At that time the Sumerians inhabited
southern Mesopotamia and the region in the west of the the Euphrates: a region known as Chaldea.

Although it does not mean that they were the first inhabitants of the region or the real ones creators of their writing system, it is to them, however, that they are the first ones where we can find attested traces of cuneiform writing.

The first documents written in the Sumerian language are found in pictographic tablets from Uruk (Erech).

Such writing was able to express only the basic ideas, through a symbol, where numerical notions were easily rendered by repeated use by strokes or circles.

The use of early pictographic forms was to evoke in the reader’s mind
basic shape of the drawn object; over time, the need for sound gave way
towards the foundation of the “new” type of representation.

This resulted in a transition from pure word writing to one over time
partial phonetic writing. Thus, for example, the image of a hand is translated for the Sumerian šu (“hand”) but also for the phonetic syllable šu in any context.

Sumerian words were largely monosyllabic, so the symbol becomes sign when it generally indicated syllables and the resulting mixture is called word-syllabic writing.

The inventory of phonetic symbols allowed the Sumerians to denote elements grammatical by means of phonetic complements added to verbal signs (ideograms).

The cuneiform writing is also part of the logograms, writings in which the graphemes can be spanned phonetically according to the consonants of the words that represent, ignoring the vowels.

The main examples of logoconsonantal characters are:

In the cuneiform, as in the Akkadian, the vast majority of glyphs are used for their sound values. Many logographic systems also have one semantic / ideographic component called “determinative”, which affects the meaning of the symbol.

As Sumerian had many identical sounding (homophones) words, different logograms yielded identical phonetic values ​​that stand out in the modern transliteration.

A logogram often represented several notions correlated with different names (for example: “Sun”, “day”, “bright”), therefore it was able to take more than one phonetic value – this characteristic is called polyphony¹.

An ideogram indicates a sign that represents an idea, which can be considered symbol: linguists tend to exclude the view that a system of writing can directly code ideas without having to use the language, and therefore generally prefer to discard the terms ideogram and pictogram, that is the graphic sign that represents the object seen and not the sound used to identify it.

But it must be considered that in the semantic-phonetic writing system, the symbols are consisting of phonograms, which represent spoken, determinative syllables, which is in turn indicate the category to which a word and logograms belong.

The discordant opinions that exist today among linguists do not interest us, at least not in relation to this article.

Examining the first texts, these were written vertically, that is, from the top to the low, but around 3000 BC the direction changed from left to right in lines horizontal. In parallel, the insignia were rotated 90 ° counterclockwise e they began to consist mainly of wedges. The numbers of symbols, from about 1,000 in the older texts, rose to 400 in the texts subsequent²

In the cuneiform, the sign sublimates an evolution and closes the idea and the symbol within itself. The Runes themselves can be identified as a logogram. Where an idea from sign it goes back to being a symbol and phoneme.

Does the rune þ have its own values? Yes

Of pictogram, because it is the drawing of the plug.

Of ideogram, because the idea is of the thorn.

Of logogram, because it is the Germanic word for “thorn” ³

Returning to the cuneiform we specify that, in the course of the third millennium, the writing system became more cursive and the pictograms developed into linear designs conventional.

Due to the prevalent use of clay tablets as a material to write (occasionally stone, metal or wood), the linear strokes acquired a wedge-shaped appearance when pressed in soft clay with the slanted edge of a stylus.

The Mesopotamians wrote on clay tablets with long reeds while this was still wet. The fresh clay then hardened, creating a register permanent.

The original Mesopotamian writings were crude images of the objects who were named, but the difficulty of drawing on fresh clay at the eventually produced the wedges and hooks joined to the cuneiform.

This writing would be formed by placing the length of the barrel along the wet clay and moving the end closest to the hand from side to side to form the hooks.

As with all cultures, writing has considerably changed the Mesopotamian social system and the relationship of civilization with its own history. Writing allowed to write Laws and therefore to assume a static character and independent; the story became more detailed and incorporated the narratives of local cultures⁴.

The curved lines disappeared from the writing and the normal order of the signs was fixed as a course from left to right, without any dividing element between words. This change, compared to the previous columns that flowed towards the low, resulted in the overturning of the signs on one side.

Akkadian readings of logograms added complicated new values. Thus the symbol indicating “land” or “mountain range” (originally an image of three mountain peaks) has the phonetic value kur based on the Sumerian, but also mat and šad from Akkadian mātu (“earth”) and šadû (“mountain”).

This has fueled some confusion.

The cuneiform has sometimes been adapted, as in the consonant script of the city Canaanite of Ugarit, on the Syrian coast (about 1400 BC), or simply taken up, as in the inscriptions of the kingdom of Haldi.

The language is distantly related to Hurrian, and the writing is a variety borrowed from the Neo-Assyrian cuneiform system. Even after the fall of the Assyrians and Babylonians in the kingdoms in the 7th and 6th centuries BC, when the Aramaic it became the general popular language.

In the Babylonians, to reveal the religious sense attributed to the divination act are the formulas and prayers that preceded him and gave him a profound tone devoted. When it came to haruspicina, the gods were asked to “prepare” the chosen victim so well, that I guess, dissecting it, would only find it happy omens, which were detailed with so much scruple of enumeration. And above all, both in the lamb that was about to be consecrated, and in the omen that was about to be dealt with, the gods were begged to “pose the Truth.” There were numerous divinities who intervened in divination operations, called for help or invoked by fortune-tellers or the faithful. But two gods seem to have been, at least at the beginning of the second millennium, more strictly in charge of the interests of applied deductive divination, considered superintendents of divinatory acts and guarantors of their results: Samaš and Adad. They “questioned themselves in the course of the divination-examination (bîru)”, “in front of them” the examination proceeded, which led to the “oracular decision” (purussû), which was taken “by their intervention” and issued “at the their command “. Therefore they were so often invoked as “masters of the divination-examination” (bêlê bîrî), of the “divination-judgment” (dînu), of the “oracular decision” and of the “prayer-dedicatory (to obtain such a decision)” (ikribu) ⁵

It is precisely in the sound-verb procedure that writing makes use of a esoteric process, between the prophetic / divinatory.

During my studies to achieve the archeology discipline to be integrated with my degree, I took the exams “Assyrology” and “History of the Ancient Near East” for two years, acquiring a method that still accompanies me in examining ancient cults; I have been accustomed to considering the symbol as a key to understanding each sign, although this evolves into the alphabet, taking into account always the historiography of the historical and mythological events of a people.