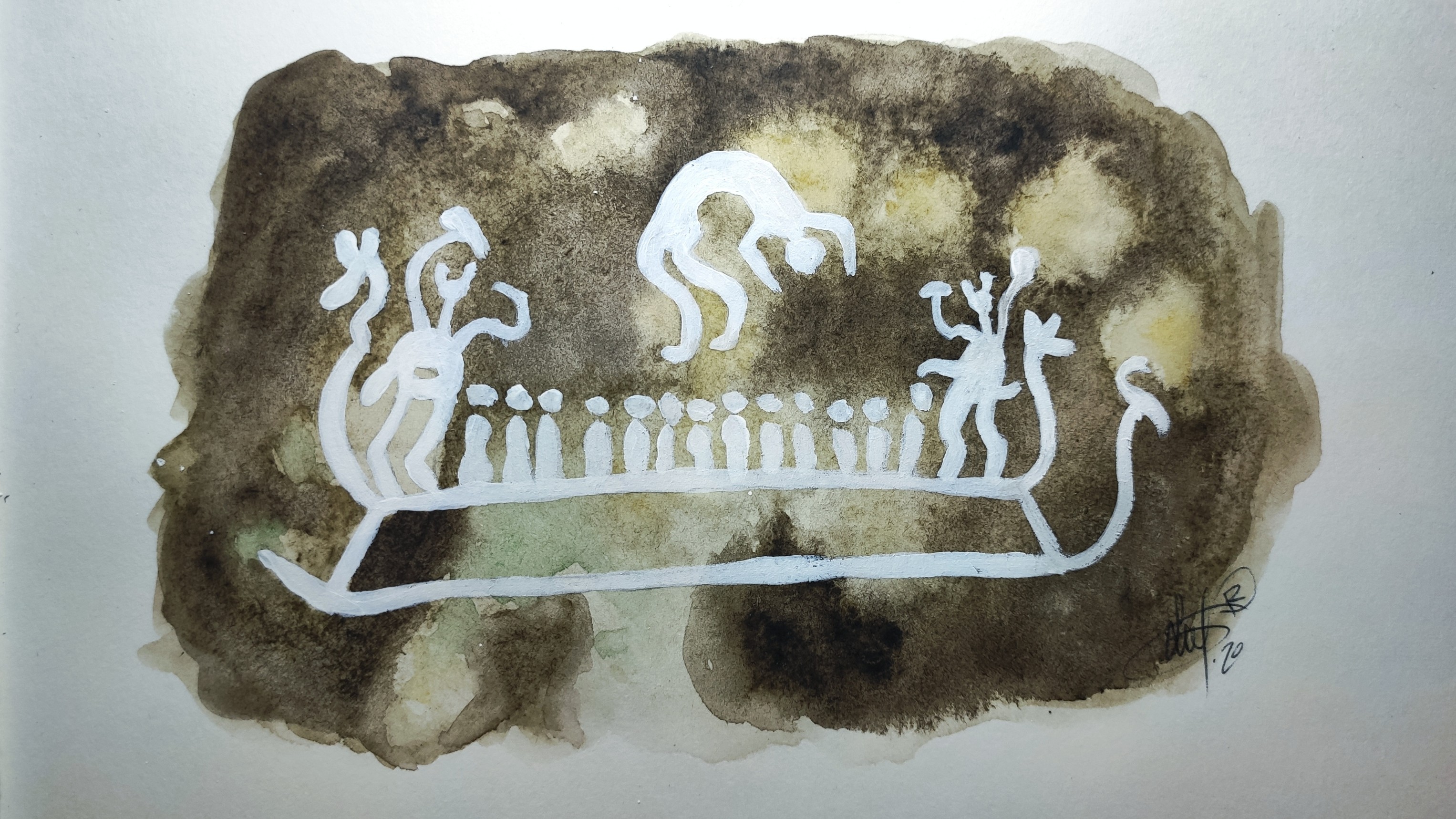 There are many fascinating artistic testimonies that have come down to us, through the millennia. Among them, the rock engravings of Tanum (Sweden), that we can date back to the Iron and Bronze Ages.

Examining this petroglyph’s portrayal, we can immediately notice two main elements: a ship and a crew of 13 human figures. It is almost very clear that some sort of hierarchy exists among them. In fact, the “leaders”with horns stand out on both sides of the ship, while in the centre the rest of the crew is deliberately painted small, and almost identical in size and shape.As you may already know, in figurative sign language each part of the image represents a word or a sentence, so for us to understand it better, we are going to “break down” and analyze the petroglyph’s elements individually, introducing thematic sub-categories.

The body of the ship is a long, horizontally positioned rectangle, in contrast with the small, vertical rectangles representing the members of the crew. The ship has the shape of a snake, and this may have different meanings and associations. First of all, it is a symbol that expresses movement itself, linked to the Earth in which it lives and moves, and in whose bowels it often seeks shelter, by digging holes.

But the snake can also be associated with water, since water embodies the vital energy (water = life) that runs and “flows”.

The ship “contains” the crew, as a vessel that leads the spirits in their voyage, just like the funeral ships that used to carry the deceased through their journey to the afterlife. Below it, there is a large space representing the underground world, that can be accessed only by the means of water: probably because of its typical characteristic of fluidity; in ancient times, it was common belief that it was the serpent the one that transported the spirits of the dead to the afterlife, through a stream of water.

Another fundamental aspect of this animal, is its strong regenerative value: this is because it periodically moults its skin, follows natural rhythms that lives a cyclic existence, alternating active phases with hibernation phases.

For all the reasons above, we can say that the snake is a very strong feminine symbol. As Richey, an archaeologist, also states, there are many elements of this representation that are directly connected to travel and overall movement, dynamism: think, for example, of the way in which the “body” of the snake is able to shape into a leg and a foot (as we can see in the initial part). It also reminds us how important it is to take into account how the left and right sides of the engraver represent respectively the East and the West.

The larger head in the East and has a hole inside it: this can be interpreted as an entrance, a “portal”.

The snake has two heads joined together, as a tunnel or a conjunction. Its horns raise it at the top of the hierarchy, just like the two horned leader: a different physical aspect also means a different role.

Summing up, we can say that the snake was here painted as a symbol of regeneration, movement, and as an element connected to the feminine, which sinuously slides down the stream of water, and accompanies the members of the crew in this “long journey” between the underground and the surface world.

The ship’s crew is made up of many small vertical rectangles that have the shape of a phallus: this could be an information that makes us understand that the crew is entirely made of male figures.

The large “horned” figure on the left and on the right is a leader and we can deduce this from the presence of the horns: if we think of animals, we understand how horns (in addition to their biological and defense functions) are also a fundamental element for ‘social’ purposes. Within the droves or herds, they serve to build a social balance and a consequent hierarchy, respected by each of the members. Here, in the representation, therefore, we can understand how the presence of the “horns” is a rather strong indication of superiority and social dominance.

The leader is depicted twice but is counted as “one” because, as with the ship’s two snake heads, he leaves from the east and arrives in the west. Basically, with this type of dual representation as a function of displacement, we can hypothesize how, metaphorically, the ship is suspended between past, present and future. The total crew count is 13: thirteen male spirits.

Looking carefully at the figure of the leader, we find many elements modeled with a “V” shape that refer, according to the aforementioned academic, to a concept of openness: the horns, the shape of his phallus and also the curvature of his arm.

Gimbutas, on the other hand, talks about how this symbol is connected to the element of water and the theme of regeneration.

Wanting to embrace both visions (and intersecting them), we can think that openness is the beginning of a path that tends to repeat itself and that therefore it is a journey of regeneration. Even the shape of the ‘curved’ phallus rod could allude to a movement that repeats itself, with an almost “circular” and cyclical trajectory: there is no beginning or end. This makes us think of the action of the Sun as it rises in the sky with the sunrise and then goes down with the sunset.

We can share the neck of the figure with the function of the “body of the snake” because, in such a spelling, it makes us understand how both have the function of connection.

Several elements referring to the two horned figures give us additional information: from the arms we understand that he is a warrior, since he is holding a weapon, which could be a knife or a hammer. Furthermore, in the case of the knife, we know that there have been cases of findings with engravings of solar symbols dating back to the Iron Age (in Scandinavia and also in northern Italy). Even the same act of the knife raised high, almost towards Heaven, makes us understand how the Sun and knife are connected.

The West-oriented figure seems to hold something like an egg, which we can analyze as a symbol of regeneration, rebirth (the one who will be born from the East). These elements make the great figure with the horns a sort of solar warrior or protector of the Sun that will regenerate itself cyclically. The difference in size between the first figure in the east (larger) and the second in the west (smaller) is not explicitly explained, but, in the light of the previously analyzed elements, we can hypothesize that it is connected to the vision of the sun as previously mentioned. These solar correspondences, moreover, could also be connected to the Seasons and therefore to the “life cycle” of the Sun which it performs during the year and which repeats itself over the centuries, during the days.

The crew in the middle could therefore also be a union between the two leaders: a path. The shape of these male spirits, being oriented vertically, further underlines their movement upwards, their desire to “ascend”.

Now let’s move on to the ‘lonely’ figure at the top.

This is also a figure that represents travel and, on the contrary, it probably symbolizes multiple journeys (given the presence of three legs). A dynamic subject who is in the act of rotating backwards. The first leg is positioned under a triangle. According to Richey, it could represent the female genital area, but in a more general and associative vision we could also see it as a symbol of the Earth, precisely as Mother and Life giver. The figure itself, in its shape and in its rotation movement, could be a metaphor of the solar star, because it is located above, suspended in the air, compared to the crew.

Based on the analysis we have dealt with above, we can say that the petroglyph does not simply describe an action that has already taken place but speaks to us of something that “has been, is, and will be”.

Interesting how each element of the representation leads us to the concept of cyclicity, repetition, movement and travel. The horned leader and his crew are male spirits and the snake ship transports them, traveling over a stream of water, up and down through portals (openings or perhaps “land splits”) from East to West. The crew will probably always be on the road, in this descending and ascending in a continuous evolution and in a perpetual ‘becoming’, in a cycle of regeneration and rebirth. There has probably never been a real start to this journey, but it has always been this way.

There are strong associations with the Sun (it originates in the East and sets in the West) and we can assume that this is the sense of the itinerary that the crew makes cyclically.

In conclusion, combining all the elements that we have analyzed so far, we are faced with a wonderful message that the petroglyph gives us:

“The snake ship rises and descends, cyclically, sliding on the water, a flow, a current that carries them.

Through the land rifts it brings the crew to the surface and then descends again.

The leader, and the 13 male spirits await The glorious rising.

The figure above rotates backwards continuously;

The leader, a solar warrior, ascends from the earth by being born in the East and descending in the West.“